Pets are more than ever providing emotional solace as well as entertainment and comic relief for animal lovers on lockdown at home during the coronavirus pandemic.

Few things are as comforting as a picture of a cute dog. Research, meanwhile, has shown that gazing into your dog’s eyes elevates levels of the bonding hormone oxytocin for both of you, just as gazing into your child’s eyes does.

Revelling in dogs’ cuteness allows us to return to a simpler time, when the activities of daily living did not pose enormous risk. Now, people are turning to online pet groups to reproduce that cuddly feeling.

An administrator for Facebook page Cool Dog Group says the general purpose of the group is “to recreate that feeling you got as a kid when a dog turned up at school”.

“Excitement, joy – everyone remembers a day like that. It’s the talk of the school for days,” says the administrator, who wishes to remain anonymous. 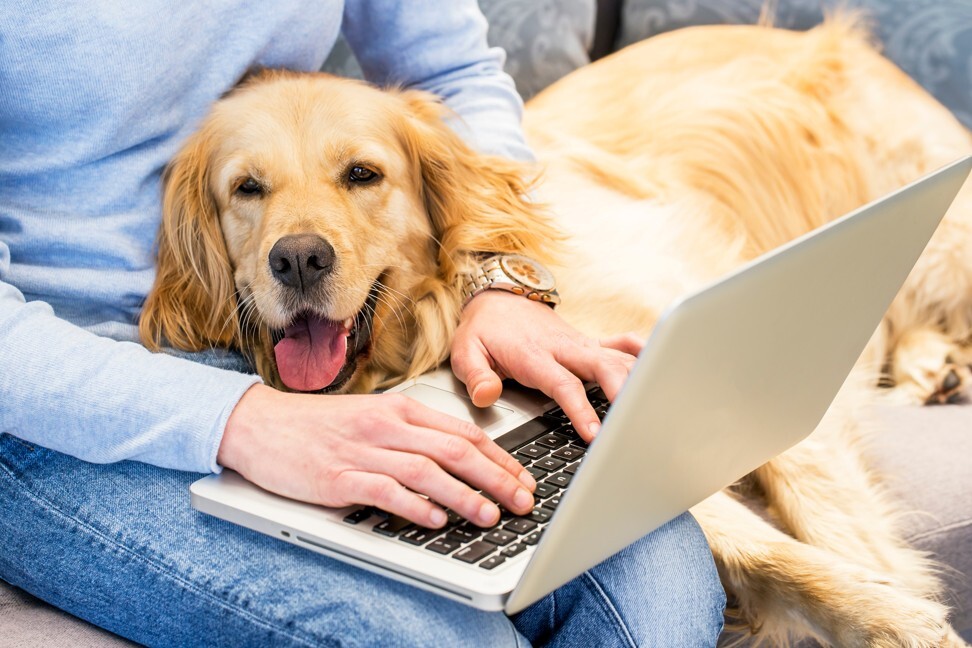 Founded in New Zealand in 2012, the group now has about 784,000 members – so many that it has capped membership in an effort to improve quality control.

Cool Dog has members all over the world, though most are in New Zealand and Australia, the latter of which has faced the double whammy of raging bush fires followed by the coronavirus.

“Our group is a place to escape things that might seem scary or stressful that appear elsewhere on social media,” the administrator says.

The site specifically asks members not to post about the coronavirus and warns them not to waste surgical face masks that are in short supply on their pets.

“Do not waste PPE [personal protection equipment] by putting it on your dog for the sake of likes on the internet,” it states in capital letters. “This is an incredibly selfish thing to do and we will not hesitate to ban you from the group permanently if you attempt to post pictures or videos of your dog in PPE here.”

But there are no limits on adorable puppy videos, like the one of nine-week-old Winnie, a Labrador and golden retriever mix, quizzically pawing a blueberry, which elicited about 100 happy comments.

“What dis?? Toy? Food? Enemy?” a member posted. Other members rhapsodised about the puppy’s “little nose scrunch” and even her paws.

Her owner responded: “I knowwwww. Her paws are my favourite thing in the world.” 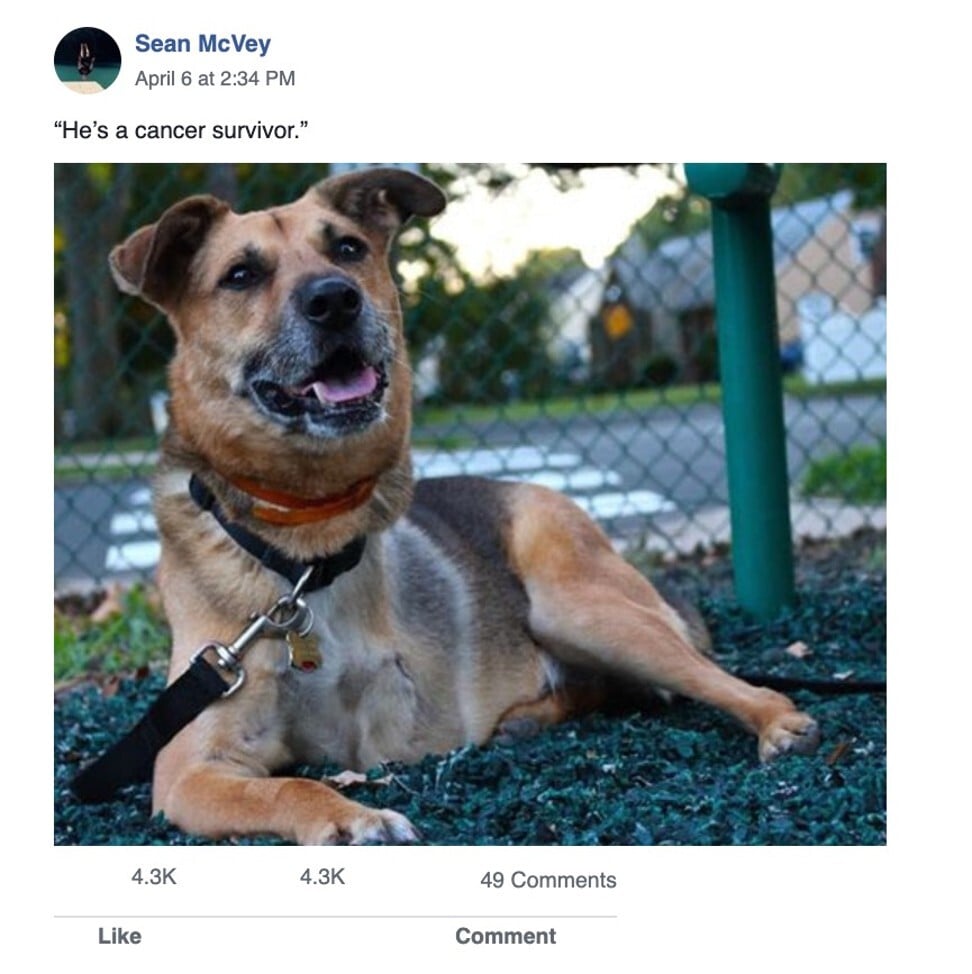 A Cool Dog post by Sean McVey of Basking Ridge, in the US state of New Jersey, with the heading “He’s a cancer survivor” and a picture of a dog missing his left front leg has got more than 4,000 likes, along with comments proclaiming the dog a “miracle” and a “champion”.

“They’re really projecting onto the animal all their wishes for themselves,” says Randy Faerber, a psychoanalyst in New York. “We want a miracle. We want a champion. We want to be saved. If we can fix this dog, if we can fix this situation, we can be fixed.”

Part of the appeal is the unconditional love dogs offer, which is even more important during times of stress and isolation. I Love Dogs Forever, a 14-month-old Facebook group, added 1,271 new members in the first week of April to its total of about 117,000. The six-month-old I Love Dogs group recently added 70 new members in just 24 hours, bringing its total to nearly 5,300. 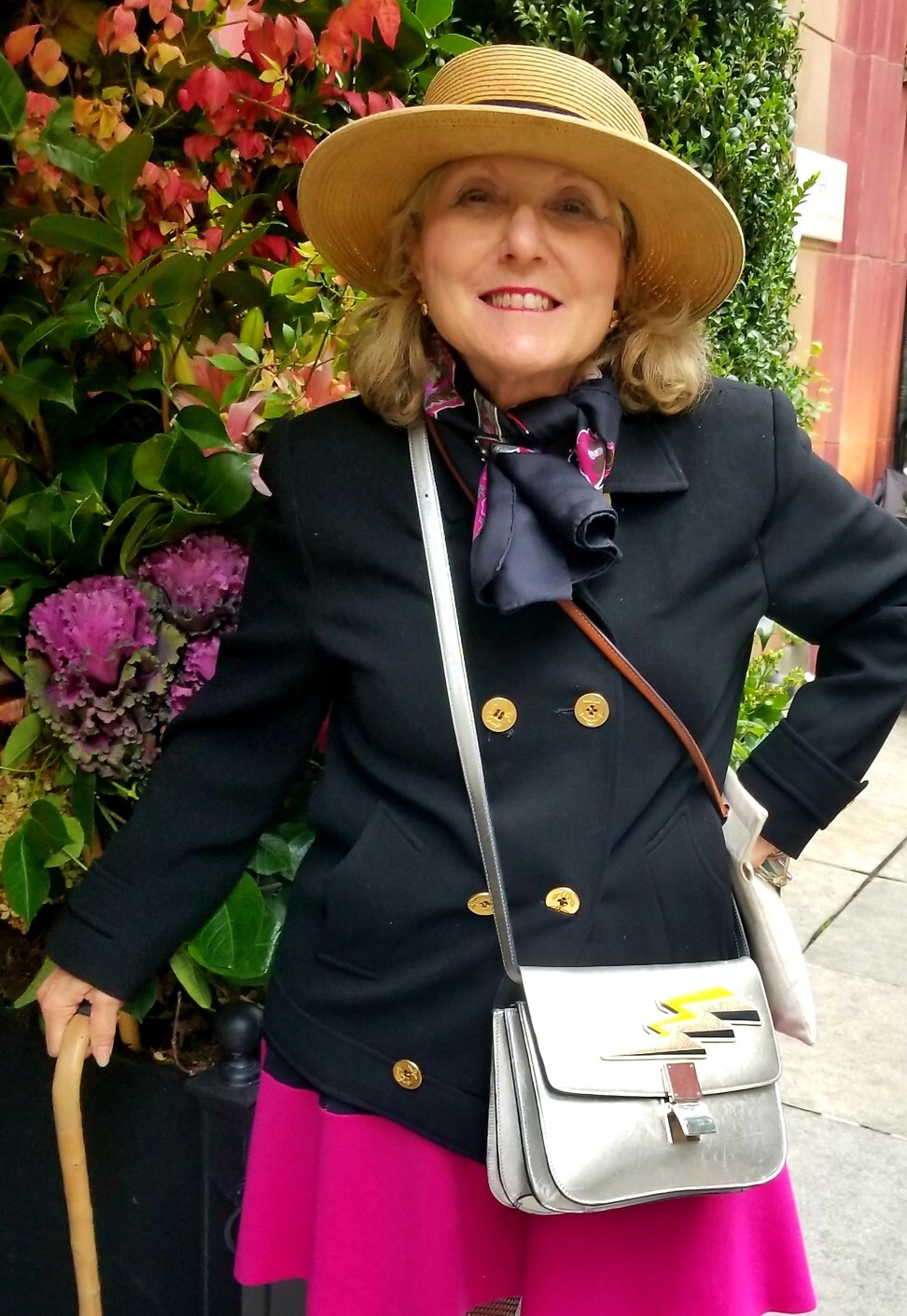 “My dog is the only person who consistently loves me all the time,” posted new I Love Dogs member John Giovanni of Brooklyn, New York, along with a photo of his Havanese, Jasper.

On the four-year-old group Hudson Valley Pets in Pictures, around 5,500 members (up 200 in the past month alone) have been cranking out as many as 130 posts on some days during the pandemic.

Focusing on their pets keeps their minds off their own plight, Faerber says. “Animals don’t know what’s going on,” she says. “They’re just being animals. If you’re with that animal, you can identify with that animal. It’s another way to feel that everything’s OK.”

The New York group was preoccupied with the recovery from herniated disc surgery of a wire-haired terrier mix named Tyson. Every post from Tyson’s “dad”, Chris Hawks, a farmer, generates hundreds of likes and comments that include compliments on Tyson’s progress, encouragement and heart emojis. 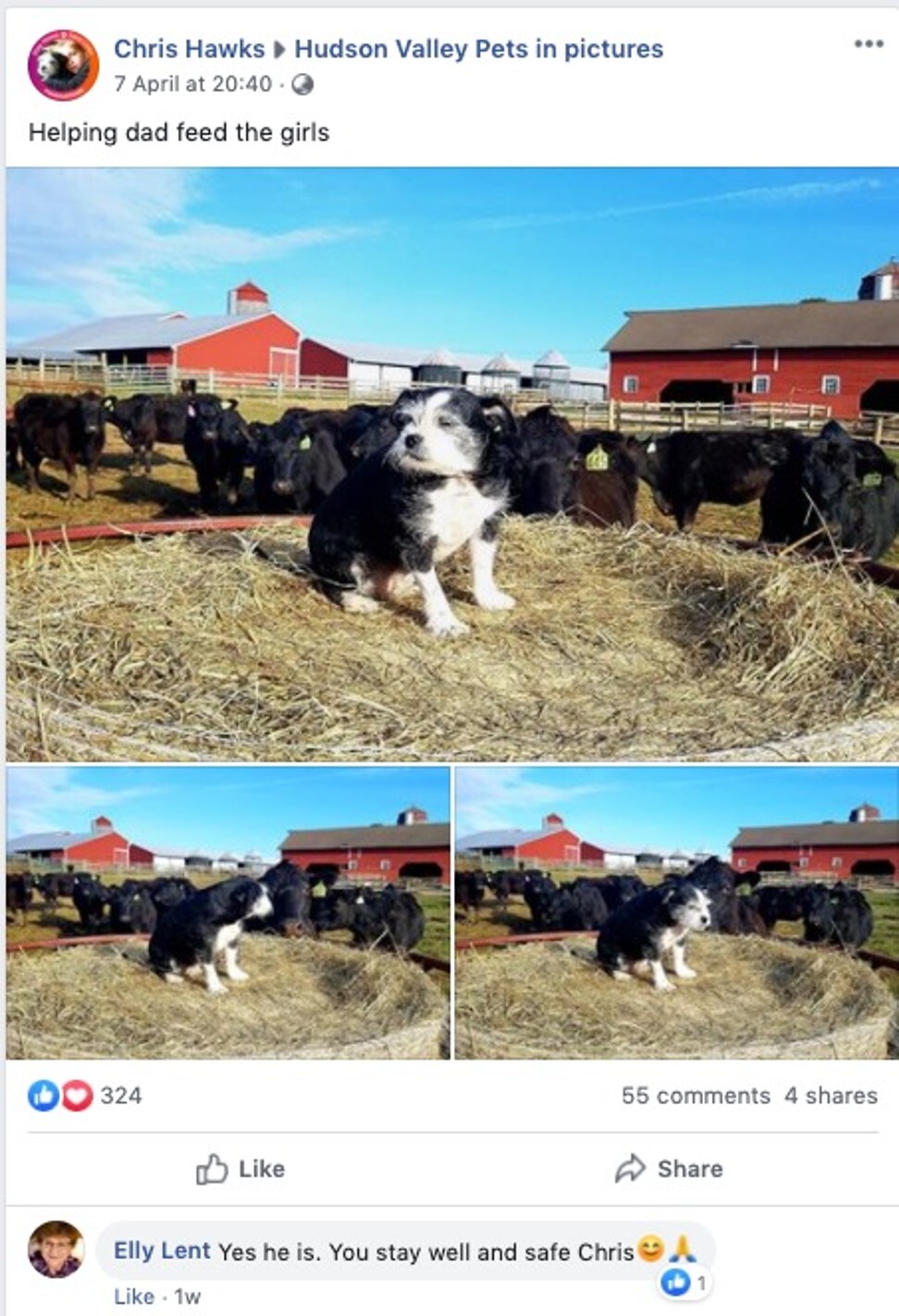 Tyson, a wire-haired terrier mix who is recovering from herniated disc surgery, sits on a mound of hay surrounded by cows. Photo: Facebook / Chris Hawks

A recent picture of Tyson sitting on a mound of hay surrounded by cows with the heading “helping dad feed the girls” racked up more than 300 likes and 55 comments, including: “He looks like he’s back to his old critter-chasing self,” from Verne Carter.

Even the most mundane Tyson posts – “Peed … now back to the house for a treat or two” with a video of Tyson slowly and unsteadily navigating a brick walkway after his surgery – are cause for celebration.

“I think it’s lifting spirits a little bit from what’s going on,” Hawks says. “There seems to be a lot more people joining in the last couple of weeks. I get a lot of people making remarks that the best way to start the day off is with a smile from Tyson.” 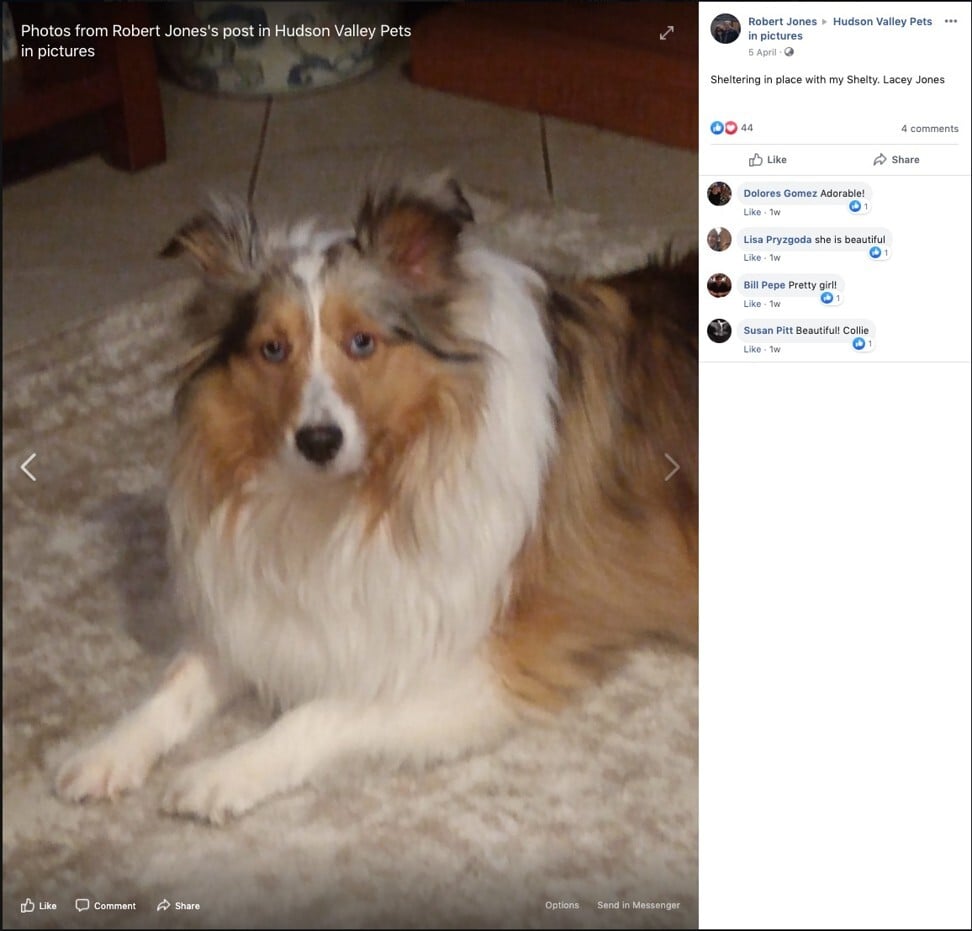 Hudson Valley Pets member Chris Gerhardt has been posting several updates a day on her Schipperke, Lulu, whose tendency to rouse her mum early for her morning walk and seek out the sunniest spot on the couch amuse her many followers.

“This site brings me so much joy,” Gerhardt says. “It’s a connection to the world because I feel like we’re all cut off, and it’s a little bit of normalcy. I know these people are still there and waiting to see Lulu.”

The site also has pictures of a bearded dragon lizard named Rocky perched on the steering wheel of his mum’s car; an unusually photogenic ferret, Dave, pausing for a furry close-up; and Paco the parrot stealing pizza from his family’s dining-room table. 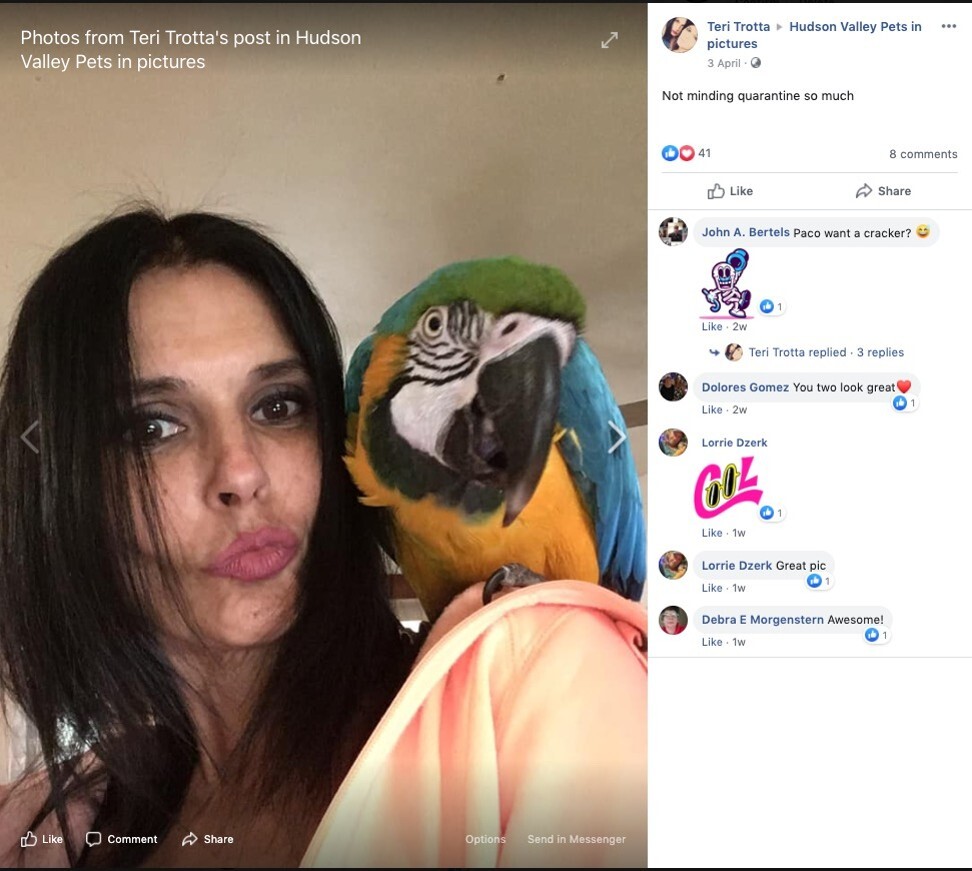 Hudson Valley Pets allows members to mention the pandemic, and many note that spending time with their pets makes quarantine tolerable.

“Sheltering in place with my Shelty,” Robert Jones wrote.

“Not minding quarantine so much,” posted Paco’s owner, Teri Trotta, above a pic of the parrot perched on her shoulder.